Zambian beef ranchers have for long recognized the ability of Boran cattle to not only survive but to reproduce and produce beef in harsh tropical conditions.

The first import of Boran cattle from Kenya to Zambia occurred in 1947 from the Sugoroi Estate herd of Mr Miles Fletcher, one of the pioneer Kenyan breeders whose herd started in 1936 from Colvile foundation stock. The Zambian consignment consisted of 130 in-calf heifers and 10 bulls purchased by Mr John Roberts, who accompanied his cattle on an adventurous journey by foot, rail and ship from Mombasa to Beira and then by rail to Zambia over the Zambezi River at Victoria Falls. When they finally arrived, 30 calves had been born on the journey.

An important import came about by chance when Miles Fletcher himself selected the cream of the Fletcher herd at Suguroi Estate, now known as the Gianni herd, and brought it to Zambia in 1963. The stock included offspring from the 1953 importation of 800 Boran heifers by the Kenyan government from the Borana and Somali tribes, and an outstanding desert-bred Boran bull.

An extract is taken from a 1979 report of the Executive Chairman of Zambezi Ranching Corporation (ZRC): “Due to political uncertainty, Miles Fletcher decided to emigrate to Rhodesia and take with him selected Borans to start a stud herd there. He made a very careful selection of heifers and bulls to provide as much variety of bloodlines as he could find in his own herd. He ran into problems with the veterinary department which prevented him from moving the herd from Northern Rhodesia (now Zambia) to Southern Rhodesia (now Zimbabwe), and Edwin Wolfson of Agricultural Enterprises Limited (later ZRC) bought 93 in-calf heifers and 9 bulls for Demo Ranch”. A total of some 200 head were sold in Zambia.

In 1970 Miles Fletcher visited Demo Ranch and wrote the following report: “The heifers and bulls bought by Mr Wolfson were specially selected by me to start a stud herd in Rhodesia, and I had in mind the fact that at the time it seemed improbable that I could ever import fresh blood, and so these cattle had as much variety of blood lines as I could find in my own herd. I could not bring any older bulls or cows as I was restricted to animals ‘not inoculated against rinderpest and not to have either had or been inoculated against foot and mouth disease’. There were also Borans for several orders in Zambia and a few sale bulls. I am certain that nobody visiting Kenya today would be able to select cattle of equal quality”.

Large numbers of Boran cattle were flown in from Kenya by individuals, corporations and government state ranches, including high quality ranch bulls and pedigree bulls for stud breeding. Most of the stock came from the Gianni and Mutara herds. The Mutara cattle dominated the imports in the 1980’s.

A significant development occurred just after Zambian Independence in 1964 when a state owned farming corporation was formed known as Zambia Cattle Development Limited, ZCDL (subsequently Zambia Agricultural Development Limited, ZADL). A stud farm was established at Monze in the Southern Province. It was an early policy decision of this company to use Boran cattle as the base breed, and the breed was dispersed over some large six state ranches in various regions covering the whole country. In pursuance of this policy some 300 females and 160 bulls were imported by air from Kenya, the bulk of which came from the Gianni and Mutara herds.

Although the ZADL herds gradually dispersed over the next 10 years, their impact on the beef industry was profound. By then, the genetics had been infused into the herds of pedigree breeders. The small scale farmers learned rapidly that the Boran breed survived where all other breeds had failed. To this day, the Boran remains the cattle breed of choice in Zambian government and donor funded livestock programs, not only for beef but also in dairy crossbred projects.

Importations in this period were extremely difficult. There were problems obtaining import and export permits. Veterinary health constraints revolved around rinderpest and foot and mouth disease. Politics and trade barriers played a role in obtaining permits. Furthermore, Zambia had severe foreign exchange control, and it took many months for payments to be approved by the banks. Communications was usually by airmail letter and telex. It was common for the entire process to take over a year.

Extracts of correspondence from the files of the Herd Book Society of Zambia (HBSZ) are testament to these difficulties.

The last airlift in 1982 brought 60 male and female Borans, mainly from the Mutara herd, which were specifically selected to broaden the Zambian genetic pool. These cattle were widely distributed among pedigree breeders.

During the period 1983 to 1988, all attempts to import live cattle and semen were unsuccessful largely due to Zambian veterinary authority concerns about the disease situation, and the Boran genetic pool of Zambian remained largely closed.

Nevertheless, as a result of the ambitious imports over the previous 40 year period, the Zambian genetic pool was diverse and healthy. Until the recent mushrooming of the Boran breed in South Africa, Zambia had the largest reservoir of stud Boran cattle outside Kenya.
The import purchase prices on record are interesting. In 1976, the quote from ADC Mutara to the HBSZ gave a price for bulls of 300 pounds sterling (today’s equivalent of 4,300 hundred rand) plus a handling fee of 15 pounds sterling to “quieten then down for the airplane”. Heifers were priced at 85 pounds sterling (1,200 rand equivalent).

The only recorded imports during this period were small individual imports of bulls, females and semen from Forrester Estate in Zimbabwe. The Forrester genetics had a profound impact on some herds.

In 2009 Chulu Borans (previously Grasmere Stud) imported live bulls, heifers and semen by road from the Ol Pejeta and Solio herds of Kenya. This was the first live import since 1982 and was achieved under very strict veterinary health test and quarantine regulations protocols. On arrival in Zambia the animals remained in quarantine for six months.
In the period 2009 to 2012, several Boran breeders have imported bulls from Woragus Stud based in Tanzania.

Boran bulls were exported in large numbers from Zambia to Zaire (now DRC) in the early 1980’s where they were used in the extensive ranches north of Lubumbashi.
In 1987 a single bull donated to President Samora Machel by Lilayi Farm at the 1986 Agricultural and Commercial Show was flown to Mozambique from Lusaka.

In 2001 Terry McLintock from Keta Borans South Africa purchased a part of the Grasmere Boran Herd with a view to expand locally and then into Zimbabwe and South Africa by way of embryos. Plans changed with political and economic instability in Zimbabwe. In 2003, some 90 Keta Herd animals including 53 Grasmere bred females and one Lilayi bred bull were flown from Lusaka to Swaziland to start a Boran stud in Swaziland. Many cattle shortly found their way into South Africa, culminating in a Keta Boran dispersal sale. This helped to stimulate South African market demand for Zambian genetics. 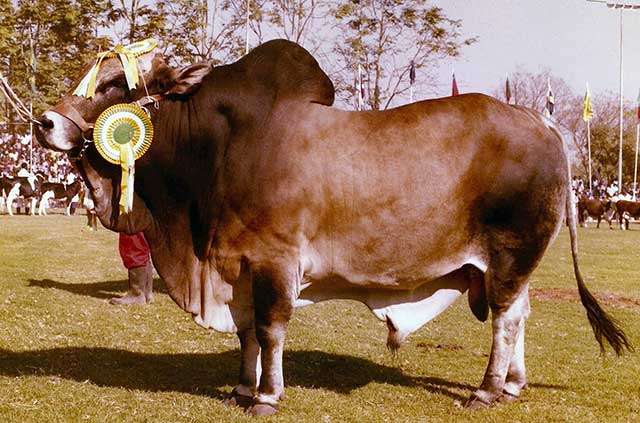 In 1987 and 1988 a team of veterinarians and beef experts from the CSIRO (Commonwealth Scientific Industrial Research Organisation) Division of Tropical Animal Science led by Dr John Frisch took some 260 frozen Zambian Boran embryos which were implanted into recipient cows in the Cocos Islands Quarantine Station. The first pure bred Boran calves were taken to the Australian mainland in 1989. The main reason for this costly exercise was to introduce the inherent fertility of the Boran into the poorly fertile herds of Queensland. The project stimulated international scientific research into various traits of the Boran, including meat quality. However, it did not have the resultant impact hoped for. The numbers of donors and embryos was small, and the donors were selected under time pressure (June Cartright pers coms). The Herd Book Society of Zambia administered the project, and a large proportion of the embryos came from Grasmere and Lilayi Stud cows.

Other embryo exports have also occurred over earlier years, resulting in Zambian Boran (Mafundzalo Stud) genetics being present in Zimbabwe and South Africa.

In 2003 the HBSZ in conjunction with the Zambian National Farmers Union started an initiative to open the protocols for the export of Boran embryos from Zambia to South Africa. The protocol negotiation was suspended regularly over several years, and the initiative was stopped by the HBSZ due to resource problems. Individuals finally drove it again and the first import permit was granted to Chulu Borans by South Africa in 2010.
Embryo exports from the Chulu Boran Stud have also taken place to Namibia in recent years.

Ronnie Landless played an enormous role in the approval of foreign exchange for early imports.

Marjorie Rundle and Joan Holmes were HBSZ secretaries who contributed enormously to the breed development.

The Herd Book Society and Boran Society of Zambia

The Herd Book Society of Zambia (HBSZ) was formed in 1972 and immediately set up a Boran section, which instituted a strict policy of inspection before registration is allowed.

The first entry into the artificial insemination (AI) register was a Kenyan bull born in 1967.

A close relationship remained with the Kenyan Boran Cattle Breeders Society for many years, including exchange of standards of excellence, inspectors and show judges.

The Herd Book Society of Zambia, its various chairmen and secretaries, played a pivotal role in the early cattle and semen imports, not only from administrative and logistical roles, but also negotiating with government officials and financially supporting the 1982 import in order to widen the genetic base.

History was made at the 1990 Boran championships when the supreme beef champion Demo Trojan 954 belonging to Galaunia Farms was sold for one million kwacha (today’s equivalent of one thousand seven hundred South African rand), thus becoming Zambia’s first “Mr Million”.

The HBSZ still maintains the registration records for its Boran breeder members. It hosts annual promotional events. The Boran Society controls the cattle inspections and approvals for registrations.

In 2012 the Zambian Boran Society, under the initiative of its chairman Craig Shiel, hosted the inaugural Boran regional meeting, which was attended by representatives from four countries – Kenya, Zambia, South Africa and Namibia.

The Boran remains by far the most commonly used beef breed in Zambia, and demand for breeding stock remains strong. The Boran dominates the Zambian market in the stud industry, commercial beef ranches, small scale farms, and crossbred dairies. Commercial ranchers may use pure Borans or cross breed them with other beef breeds, usually with a Bos taurus type animal. Boran – Brahman crosses are becoming increasingly popular. The Boran is used widely in dairy cross breeding programs.

There are some 18 active stud Boran breeders in Zambia. In the last three years, the Boran section has made up 40 to 50% of all the HBSZ birth notifications, and 60 to 80% of cattle inspected. There is a strong upward trend with the numbers of Borans being birth notified and inspected each year.

Only a small number of Boran breeders register with the Herd Book Society of Zambia. Thus the statistics of many commercial Boran herds, and the total Boran gene pool remain largely uncaptured.

Whilst demand for pure Borans is strong, the domestic demand for pedigree registered animals is weak. Thus, like other countries in the region, the gap between stud and commercial breeding stock prices is small, which does not encourage stud breeding membership and places constraints on the resources of the HBSZ.

Record keeping of most stud breeders is good. It is encouraging that, in recent years, younger breeders are taking over and developing studs, with a strong emphasis on data records and performance testing. It is hoped that a regional database will develop for the collation of all Boran data in Africa over the next 10 years, and the generation of breed EBV’s